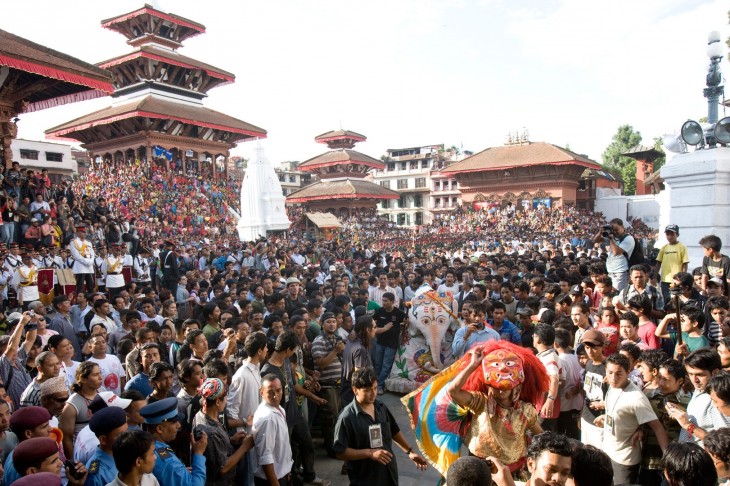 Nepal is a landlocked country located in South Asia with China in the north and India in the south, east and west. The country occupies 147,181 sq. km of land and lies between coordinates 28°00′N and 84°00′E. Nepal falls in the temperate zone north of the Tropic of Cancer. The entire distance from east to west is about 800 km while from north to south is only 150 to 250 km. Nepal has vast water systems which drain south into India. The country can be divided into three main geographical regions: Himalayan region, mid hill region and the Tarai region. The highest point in the country is Mt. Everest (8,848 m) while the lowest point is in the Tarai plains of Kechana Kalan in Jhapa (60 m).

The mountainous region begins at 3000m leading up to the alpine pastures and temperate forests limited by the tree-line at 4,000 m and the snow line beginning at 5000 m. Eight of the world’s highest peaks (out of fourteen) that are above 8000m lie in Nepal:  Mount Everest (8,848 m), Kanchenjunga (8,586 m), Lhotse (8,516 m), Makalu (8,463 m), Cho Oyu (8,201m), Dhaulagiri (8,167 m), Manaslu (8,163 m) and Annapurna (8,091 m). The inner Himalayan valley (above 3,600 m) such as Mustang and Dolpo are cold deserts sharing topographical characteristics with the Tibetan plateau. Nepal holds the so called “waters towers of South Asia” with its 6,000 rivers which are either snow-fed or dependent on rain. The perennial rivers include Mahakali, Karnali, Narayani and Koshi rivers originating in the Himalayas. Medium-sized rivers like Babai, West Rapti, Bagmati, Kamla, Kankai and Mechi originate in the Midlands and Mahabharat range.

Of the163 wetlands documented, the nine globally recognized Ramsar Sites are: Koshi Tappu Wildlife Reserve, Beeshazarital (Chitwan), Jagdishpur Reservoir (Kapilvastu) Ghodaghodi Tal (Kailali) in the Tarai, and Gokyo (Solukhumbu), Phoksundo (Dolpa), Rara (Mugu) and Mai Pokhari (Ilam) in the mountainous region.There are more than 30 natural caves in the country out of which only a few are accessible by road. Maratika Cave (also known as Haleshi) is a pilgrimage site associated with both Buddhism and Hinduism. Siddha Cave is near Bimalnagar along the Kathmandu-Pokhara highway. Pokhara is also known for caves namely Bats’ shed, Batulechar, Gupteswar, Patale Chhango. The numerous caves around Lo Manthang in Mustang include Luri and Tashi Kabum which house ancient murals and chortens dating back to the 13th century.